Emmy Noether – Original in More Ways Than One 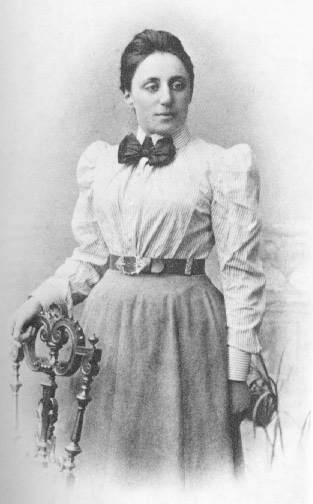 If you ask anyone to name a famous woman mathematician, the names that come to mind will usually be Hypatia, Ada Lovelace, Emilie du Chatelet, or Maria Agnesi, if they can name any at all. I must admit that these women were the ones who attracted my attention as well when I started reading the history of mathematics. Each of these has something that attracts us apart from mathematics: Hypatia’s brutal death, Ada’s famous father, Emilie’s famous lover, or Maria’s piety. Yet with each of these women there are debates about how much original work they actually did and how much was primarily building on the work of others. There is no doubt that they were all brilliant and deserve to be remembered, but there is one who undoubtedly did work that was so original that it changed the way we do mathematics and is virtually unknown outside of specialist circles: Emmy Noether.

Emmy Noether made groundbreaking contributions to theoretical physics and abstract algebra. She developed several formulations to support Einstein’s General Theory of Relativity, in fact he wrote to David Hilbert, “You know that Frl. Noether is continually advising me in my projects and that it is really through her that I have become competent in the subject.” The principle behind Noether’s Theorem is foundational to quantum physics proving that the laws of physics are independent of time and space. And yes you can even blame her for “New Math,” her approach, just very, very, watered down. In spite of all of this, she worked almost her entire life without pay because she was a woman.

The facts of Emmy’s childhood are pretty normal for the time. She was born Amalie Emmy Noether on March 23, 1882, in Erlangen, Bavaria, the oldest of four children in a well-to-do Jewish family. Her mother, Ida Amalie Kaufmann, came from a wealthy family and her father was a well-respected Mathematics professor at the university in Erlangen. Emmy was the only girl and while her three brothers followed the traditional educational track for boys, she was schooled in music, religious instruction, language, child care, household management, etc. Girls were not admitted to universities in Germany, so there were no college-preparatory schools for them. When Emmy completed her instruction around age 15, she entered a teacher training program with the idea of teaching French and English. She did very well, except in her practical teaching skills.

Emmy was very likeable and easy to get along with. She was interested in mathematics, showed a definite aptitude for it, and was certainly exposed to it. One of her brothers went on to be a math professor and a good family friend Paul Gordon would be a very important mentor to Emmy in her early professional life. Her father was supportive and spent time with her teaching her mathematics even though it wasn’t part of her course of instruction. So why the teacher training? As a child Emmy was clever, friendly, and sociable, but she was also considered plain and ordinary. She spoke with a slight lisp, was near-sighted, and later in life would be described as loud and “heavy of build.” Emmy said herself that she didn’t have the patience to be a wife or mother, and she seemed to have little interest in clothes. Her mother may have expected Emmy to have to support herself, so she encouraged the teaching career.

Emmy passed her examinations to teach, but when she finished her course of instruction some of the university rules were being relaxed and she decided she wanted to study mathematics. Women still couldn’t officially enroll, but they could audit with the permission of the professor, so with the support of her father and Paul Gordon, she took classes over the next two years and prepared to take the university entrance exams. In 1903, she passed these exams and even though she still couldn’t officially enroll, she went to Göttingen to study mathematics. Göttingen had the leading math department in Germany led by Felix Klein, who was a proponent of admitting women to higher education. While there she met David Hilbert and was exposed to his work in abstract algebra. Hilbert is considered by some to be the greatest mathematician since Gauss, and he would later have a great impact on Emmy and her work. 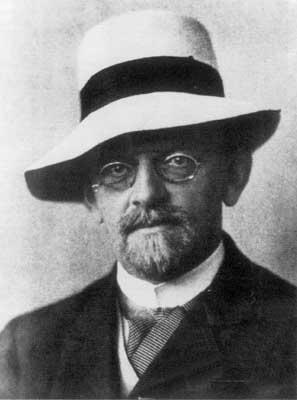 Hilbert, considered by some to be the greatest mathematician since Gauss, was a proponent of admitting women to the university.

Emmy only spent one semester at Göttingen and returned home, possibly due to illness. During this time, the University at Erlangen had decided to admit women and Emmy officially enrolled as a student. Working closely with Paul Gordon, she completed her dissertation and in 1907 at the age of 25 was awarded highest honors. Over the next seven years, she worked at the university, writing papers, speaking abroad, and filling in for her father as his health declined, all without pay. The money wasn’t important to Emmy as long as she could do mathematics.

Emmy’s dissertation and Gordon’s style of work was very dense, full of many equations and calculations. Although, Emmy thought very highly of Gordon, she was not entirely happy with this approach, and she began to apply Hilbert’s abstract approach to algebra. She had written some very important papers already in her career, but this is where she would make her greatest contribution. In 1915, with the help of her father, she arranged to go back to Göttingen to study with Felix Klein and David Hilbert. It wasn’t long before Klein and Hilbert both felt that Emmy deserved a teaching position. They met with a lot of resistance. It wasn’t until 1919 that she was allowed to teach classes on her own, but it had to be as Hilbert’s assistant. The classes would be registered under Hilbert’s name, but Emmy would be the professor, and she still wouldn’t be paid. Fortunately, her mother’s brothers had set up a small trust fund for her, so she had some income. By 1923, she had gained more recognition and was granted a position with a small stipend.

Emmy had a unique teaching style. She had little patience with presenting established concepts, rather she would often work out her own research with the class. Needless to say many weren’t able to follow her, but the students who stuck with her were very loyal and were sometimes referred to as “Noether’s boys.” They would come to her house to discuss math and even when school was officially out, she would meet them at a local café for discussions. Gordon had often continued teaching during what he called “math walks” and Emmy adopted this style as well. One of her students from her time at Byrn Mawr in the 1930s said that they had to watch to keep her out of the streets or from running into things, because she would get so involved in talking about math. She had an enthusiastic style, often ending up disheveled by the end of class with her hair coming out of its pins. 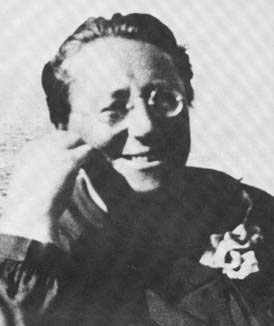 Throughout the 1920s, Emmy established herself as one of the leading mathematicians in the new field of abstract algebra. At the same time, she contributed greatly to the work of others. There seemed to be no jealousy or resentment in her at all. In 1933, with Hitler’s rise to power, many Jews lost their positions at German universities. Emmy was one of the first six to be dismissed from Göttingen. Yet she continued to hold clandestine classes in her home for the students who would come. One of her favorite students Ernst Witt would come to her home in his Brownshirt uniform. As far as the university was concerned she had three strikes against her; she was a Jew, a liberal pacifist, and she was a woman. But for Emmy, it was all about the math, nothing else mattered. If someone wanted to learn or work with her she would do it.

After her dismissal from the university, her friends began to try to find her a position out of Germany. She initially wanted to go to Oxford, or Russia where her brother went, but finally ended up at Bryn Mawr in Pennsylvania in the United States. This also gave her the opportunity to lecture at the Institute for Advanced Study at Princeton as well where Einstein was working. At the age of 51, she had her first real salary as a professor of mathematics. Her time here was good, but it was short. In 1935, Emmy went into the hospital for surgery to remove an ovarian cyst. The surgery appeared to go well, but four days later, her fever spiked and she lost consciousness. Emmy Noether died on April 14, 1935.

At her memorial, her close friend Hermann Weyl had the following to say about her:

“It was too easy for those who met her for the first time, or had no feeling for her creative power, to consider her queer and to make fun at her expense. She was heavy of build and loud of voice, and it was often not easy for one to get the floor in competitions with her. . . But she was a one-sided human being who was thrown out of balance by the over-weight of her mathematical talent . . . The memory of her work in science and of her personality among her fellows will not soon pass away. She was a great mathematician, the greatest, I firmly believe, that her sex has ever produced and a great woman.” 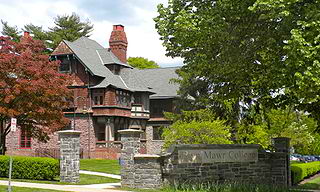 The entrance to Bryn Mawr, where Emmy spent the last year and half of her life.

Dame is a Four Letter Word – an audio recording about the life of Ada Lovelace and Emmy Noether.

I'm a blogger, freelance writer, and former teacher. After 12 years in the telecommunications industry, I taught math and science. I have, however, always loved history! So now I am indulging by reading many great books and sharing what I learn. As Harry Truman said, "The only thing new is the history you don't know." Please comment, I would love to receive your feedback. Thanks for reading.
View all posts by Susan Ozmore →
This entry was posted in Educators, Germany, Mathematicians, Nobel Prize and tagged 19th century, 20th century, abstract algebra, Bryn Mawr, David Hilbert, Einstein, Erlangen, Göttingen, mathematics, quantum physics, relativity theory. Bookmark the permalink.

10 Responses to Emmy Noether – Original in More Ways Than One