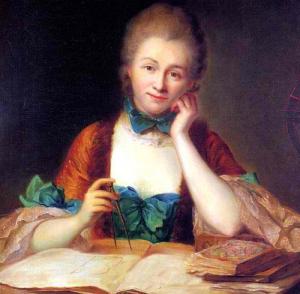 Depending on where you have heard of Émilie du Châtelet you know her as a mathematician and scientist, or the paramour of Voltaire. She was both, a complex woman stimulated by intelligent conversation and study, but also a coquette. On the one hand very unusual for a woman of the 18th century, on the other a product of her time.

Gabrielle-Émilie Le Tonnelier de Breteuil led a privileged life.  Her father was an official in the court of Louis XIV at Versailles.  At the time of Émilie’s birth, he held the position of Introducer of Ambassadors at court.  This put him in the midst of all of the important social happenings of the time in France. Her mother Gabrielle Anne de Froulay was brought up in a convent and well educated for a woman of that time.  The family owned a home in Paris and an estate in Touraine.

Émilie was born in 1706, the only girl of six children. Three of her brothers survived to adulthood, although only one lived to an old age becoming an abbé and later a bishop. As with many women of the time, Émilie was educated because her father recognized her genius and promoted it by providing tutors for her. Although Émilie’s mother was educated in the convent, there is some evidence that she resisted the rigorous education that her husband gave Émilie. In spite of this, tutors were brought to the house to teach her astronomy, mathematics, and physics. She became fluent in German, Italian, Latin, Greek, and as an adult, published translations of literary as well as scientific works into French. In spite of her recognized brilliance, her education wasn’t strictly academic. She received training in fencing, riding, the harpsichord and opera. However, her preference in study was for mathematics and philosophy, certainly unusual for a woman of the 18th century. In a somewhat scandalous application of her abilities, she used her knowledge of mathematics as a teenager to prosper as a gambler. The proceeds were, of course, used to buy the science and mathematics texts she wanted.

All young aristocratic women of the time were expected to make a good marriage and Émilie was no exception. A marriage was arranged and in 1725, she married Marquis Florent-Claude du Chastellet-Lomont. She became the Marquise du Chastellet. (The spelling Châtelet was introduced later by Voltaire.) Émilie was nineteen and Claude was in his early thirties. The marriage doesn’t seem to have been a very passionate affair. It would survive infidelities on both sides. They did, however, have three children: Françoise Gabriel Pauline (1726), Louis Marie Florent (1727), and Victor-Esprit (1733) although Victor died in 1734. .

Claude was a military man, this kept him away from home quite a bit and by the time Émilie had her third child, she was bored. Tired of being away from society and ready to resume her active life and her studies, she reemerged on her own terms. Although Émilie didn’t actively resist convention, she was determined to live her life as she saw fit. She lived life enthusiastically and with boldness. Unfortunately, this approach had its consequences and she became the focus of a fair amount of malicious gossip. Lynn Osen, in her book Women in Mathematics, states that Émilie committed two unforgivable sins: “She refused to give up her serious study of mathematics” and “she stole the heart of Voltaire.”

In eighteenth century French society, as in many other times, the issue that concerned people in their gossip was not whether or not a woman had affairs, but was she discreet. There are three names that are associated with Émilie ’s love life. Although Émilie  knew these unwritten rules, at the end of her first affair she broke them in a very indiscreet way. There are a couple of different versions of how it came about, but the result is the same, she attempted suicide. Whether this was an attempt at emotional blackmail or just evidence of her passionate nature, it was thwarted by her lover when he discovered her and got her immediate medical attention.

Émilie ’s second affair, and a friendship that would last until her death, was with Voltaire. She may have met him when she was young, but her adult friendship began with him in 1733 after the birth of her third child. Even though intellectual women were the butt of many jokes during that time not only in society, but also in literature and the theater (“femme savant” was not a compliment), intellectual men often still sought out these women as their companions. Émilie  and Voltaire were companions in every sense. Over the next 15 – 16 years before Émilie ’s death in 1749, they would rarely be separated and would challenge each other to produce work that has stood the test of time.

Voltaire was often in trouble with the powers that be and was exiled to Britain at one point. When his exile seemed imminent again, Émilie  suggested that they go to one of her husband’s country estates at Cirey. Claude seems to have liked Voltaire and if not welcoming of his wife’s affair at least accepting of it. Émilie  and Voltaire set up a laboratory, accumulated a library and did substantive work during their time here. Émilie  came into her own in mathematics and science and began to make a name for herself.

You could think of them as collaborators of a sort, but although they had many interests in common, their strengths were different. One early example of how they did collaborate was when Voltaire entered a contest for an essay on the scientific properties of heat and light. Émilie  worked with him on his experiments and ideas, but at some point she disagreed with his conclusions and decided to enter the contest herself. Neither won, but both were recognized for their work by having it published. The prize was jointly awarded to three men one of whom was Euler. (That will give some of you an idea of the competition they were up against.)

Although, Émilie  translated literary works and wrote Biblical Commentary on Genesis and the New Testament, there are two major works for which Émilie  du Châtelet  is best known. One is Institution de physique, “Lessons in Physics.” Originally intended as a text for her son, it was her assessment of the latest ideas in science and mathematics. In it she attempted to reconcile and explain the works of the major thinkers of her time, such people as Newton, Leibniz, etc. These were concepts that few people could really grasp at the time.

The third name associated with Émilie ’s love life is the poet Jean François de Saint-Lambert. In the winter of 1747 – 1748, Émilie  traveled with Voltaire to Lunéville, the home of the duke of Lorraine. Here she met and fell in love with Saint-Lambert who was ten years her junior. She also became pregnant. Although Voltaire may have been hurt, it is also possible that by that time their relationship had settled into one of companionship rather than lovers. In either case, he remained by her side and with Saint-Lambert returned to Cirey. I’ve read a couple of theories about what happened next. One is that the three of them conspired to get her husband back to Cirey to convince him that the child was his. The other which seems more likely to me is that he cooperated and returned to spend time there in order to give the child legitimacy. In either case, they were all three with her when the child, a daughter, was born in September of 1749. Although, the delivery seemed to go well, Émilie  died a week later.

Some people may have viewed Émilie primarily as Voltaire’s muse, but she was much more. She was a brilliant, sometimes contradictory, woman who chose as much as possible to live life on her own terms.

I'm a blogger, freelance writer, and former teacher. After 12 years in the telecommunications industry, I taught math and science. I have, however, always loved history! So now I am indulging by reading many great books and sharing what I learn. As Harry Truman said, "The only thing new is the history you don't know." Please comment, I would love to receive your feedback. Thanks for reading.
View all posts by Susan Ozmore →
This entry was posted in France, Mathematicians, Scandalous Women, Scientists and tagged 18th century, famous lovers, France, mathematics, Newton, Principia Mathematica, Voltaire. Bookmark the permalink.