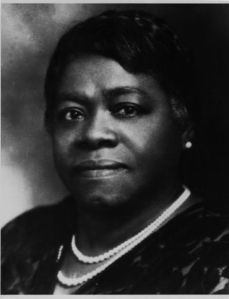 In 1904, a young woman with faith in God and a passion for education opened a school in Daytona Florida with $1.50 and five young African-American girls. Over the next fourteen years, the school would add a four-story building containing dormitories for students and teachers, a two-story addition containing kitchen and domestic science facilities, a twelve acre farm for growing vegetables, raising cows and practical training for the girls, another six acre tract and an auditorium. The woman with the drive and passion to do this was Mary McLeod Bethune and this was only the beginning of her amazing and productive life.

Mary McLeod was born in 1875 to Samuel and Patsy McLeod on a small cotton and rice farm in South Carolina. Her parents were former slaves and she was one in a very large family. She worked on the farm as a young child, but was always ambitious. Eventually, she was able to go to a small mission school in Mayesville, SC. Then with scholarship assistance she continued her education at Scotia Seminary in Concord, NC and Moody Bible College in Chicago.

Mary’s goal was to be a missionary to Africa, but she was told that black missionaries weren’t needed, so she returned to teach school in South Carolina. In 1898, she married Albertus Bethune. They had one son, Albert. She worked as a teacher and in social work until in 1899 the family relocated to Palatka Florida where Mary taught in a mission school. Mary felt strongly that an important way to improve the lives of African-Americans was to educate the girls. She was inspired by both Emma Jane Wilson the teacher in the mission school where she was educated and by Lucy Craft Laney who founded the Haines Normal and Industrial Institute in Augusta Georgia. Bethune spent a year teaching at the Haines Institute and was very impressed with Laney’s educational philosophy.

The Literary and Industrial Training School for Negro Girls in Daytona was founded in 1904 when Mary rented a small house for $11 a month. With five girls as students, her son, and the help of local parents and churches she began the hard work of creating a school that would eventually become the Bethune-Cookman University in 2007.  In addition to academic classes, the girls were given a rigorous Christian foundation and practical skills such as dressmaking, millinery, and cooking.

Bethune served as president of the school until 1942, but her time was increasingly taken up with fund raising. In spite of this, she was also involved in other activities that raised awareness and improved the lives of African-Americans, specifically African-American women and children. She served as the Florida president and national president of the National Association of Colored Women (NACW.) She attended the Child Welfare Conference called by President Calvin Coolidge in 1928 and was appointed to the White House Conference on Child Health by President Herbert Hoover in 1930. In 1935, Mary brought together 28 agencies to form the National Council of Negro Women. The NCNW sponsored the White House Conference on Negro Women and Children in 1938.

Through these organizations, Mrs. Bethune was instrumental in getting African-American women into officer positions in the Women’s Army Corps during WWII as well as ensuring that black colleges participated in pilot training programs. She lobbied the National Youth Administration to include black youth in their programs. During this time she became close friends with Eleanor Roosevelt. Because of this she had easy access to the White House and became a member of the “Black Cabinet” a group of well respected African-Americans that met informally, but had influence over issues affecting all African-Americans. Among her many honors was being the only African-American woman present at the founding of the United Nations in 1945. She represented the NAACP with W. E. B. Dubois and Walker White.

She believed that education about black people was important not only to promote pride in black children, but to promote understanding among all races.

“Not only the Negro child but children of all races should read and know of the achievements, accomplishments and deeds of the Negro. World peace and brotherhood are based on a common understanding of the contributions and cultures of all races and creeds.”

It seems that she made significant progress toward her goals When Mary McLeod died in 1955, she was remembered in many newspapers across the country for her achievements. Three quotes that I found in Wikipedia sum this up nicely:

She was, “one of the most potent factors in the growth of interracial goodwill in America.”  The New York Times

“So great were her dynamism and force that it was almost impossible to resist her… Not only her own people, but all America has been enriched and ennobled by her courageous, ebullient spirit.”  The Washington Post

“To some she seemed unreal, something that could not be… What right had she to greatness?… The lesson of Mrs. Bethune’s life is that genius knows no racial barriers.”  Daytona Beach Evening News 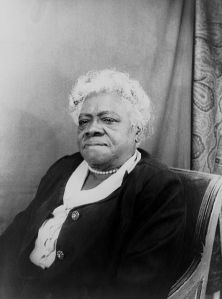 I'm a blogger, freelance writer, and former teacher. After 12 years in the telecommunications industry, I taught math and science. I have, however, always loved history! So now I am indulging by reading many great books and sharing what I learn. As Harry Truman said, "The only thing new is the history you don't know." Please comment, I would love to receive your feedback. Thanks for reading.
View all posts by Susan Ozmore →
This entry was posted in Activists, African-Americans, Educators, United States and tagged 20th century, activist, African-Americans, Juneteenth, Mary McLeod Bethune, women, women's history. Bookmark the permalink.